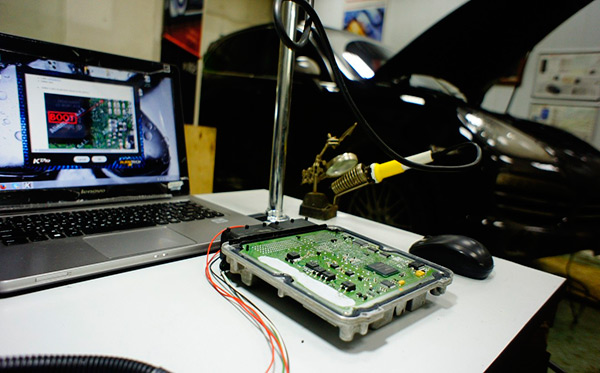 As a rule, the most trustworthy data about chip-tuning is reported by specialized tuning firms.

The main issue of chip-tuning is to boost engine potential without any intervention to its mechanical parts but only by modification of handling impulses from electronic control unit. As a result, motor power output can be increased or fuel economy can be obtained, according to the needs of vehicle owner.

There are two different approaches to chip-tuning procedure:

- Modification of the data in directly in the ECU. This procedure is also known as “remapping”

It is quite simple manipulation, which does not require any special education in the field of electronic. It can be provided just in everyone’s garage. The additional unit modifies signals, which sensor supply to the ECU, and in definite situations can substitute handling impulses form ECU to different engine systems. As a result power and torque output grows. Supplementary device does not affect any byte in the memory of main control unit. It neither can’t be tracked by car protection programs, so you won’t see “Check Engine” indicator with its annoying yellow light. The possibility of engine destruction due to this way of chip-tuning is unreal. It also does not violate warranty conditions because it leaves main operating protocols intact.

Modification of the data in directly in the ECU – remapping.

Only highly educated specialists are able to implement this procedure properly. Vehicle ECU is connected to laptop through ODB connection (specific type of data transferring cable) and stock operating protocols are replaced with new designed ones.

The manipulation is very alluring due potential ability of maximum speed limit cancellation or modification. In some cases, newly written or deeply revised programs, which were recorded into ECU memory, can radically raise engine productivity to the level, which can’t be achieved by chip-box tools.

Copied to the ECU fresh handling programs as a usual do not pass such strict testing procedures as standard protocols. An addition, to allow overwriting, ECU safety systems are blocked during remapping. All these events lead to potential danger of engine malfunction or even its destruction. There is also real risk of damage to fragile electronic ECU components during this operation. If it happens, your car simply will not turn on.

Besides that, variety of errors in unchecked operating protocols shows its negative effects only with time, they can’t be tracked immediately after remapping. It’s one of standard complications and technical personal know it well, but they do not warn customers about it because it’s very difficult to prove anything afterwards.

Moreover, nearly all new designed vehicles have special software or firmware elements, which are able to reveal remapping even after repair of stock mapping protocols. As you know, the proven fact of violation to ECU cause to warranty cancelation.

Our team is very concerned with safety of your engine and abides by your warranty conditions. Since that, we prefer to install chip-boxes to improve your car drivability.